How can I measure experience in terms of running time….

So last year I ran the same race as yesterday, the Paddock Wood half marathon. Same course, same distance, same vest, everything. With one difference.

Last year I started in the time pen I thought I should be in, hovering around 1:40 finish time. I remember my first mile that day was something silly like 8:20, and I also remember passing a lady after a mile and a half who was already walking and out of breath. I thought to myself either she was in the wrong pen or I was. Knowing that I started in the right area for my time, I decided it was the former and that she had slightly overestimated her finish time. I don’t know her and maybe she was faster than she looked at that specific time and pulled her calf maybe?

This year, and put it down to experience, I made sure I got to the front before the gun went off and I was as close to the sub 1:20 as I could let myself be. My first mile was maybe a little too fast but it made a huge difference. Not only was I 1:46 minutes ahead of where I was last year, psychologically, I felt so much different. Last year’s first mile made me both annoyed and aware I was behind where I wanted to be in terms of time. That was energy I didn’t have to waste in worrying about my time.  By now I was playing catch up and again, in doing so, used up a lot of energy which subsequently affected my whole race.

12 months on and with that experience behind me, the first mile was a completely different story. 6:34, runners who were the same pace as me and time in the bank that if I tired later on I knew I’d still be close to my target. I felt good.

Now, after a full winter’s training behind me, this year I was in much better shape, so I could argue that it wasn’t a fair test. But comparing both my target times for the two races, 2017 was a quicker than expected time and a much more satisfying result.

It also resulted in me getting a personal best in the half marathon in 1:31:18. And if it wasn’t for a stitch just before half way I felt I was on course for an even quicker time….but that’s for another year. 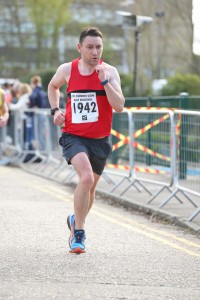 But for this year, the lesson I have learned is that experience is a great tool to have and can help take minutes off your time.